Zachary Scott is Anything But in 'Guilty Bystander' 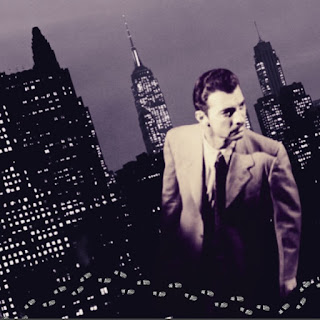 There are B-movies and then there are B-movies, and Joseph Lerner’s “Guilty Bystander” (1950) looks like it was made on a shoestring budget by any standards. Its broken-down boarding rooms and dingy bars make the averagely seedy noir seem ship-shape, upbeat even. The mystery plot is muddled altogether and could have done with a little less conversation (and a little more action, please) in some places, but there’s a sympathetic note at the heart of its plots and a depth to its characters, and the film’s many shortcomings are plenty redeemed by some very fine cinematography, creative sets, and favourite character actors, not to mention great music by Dimitri Tiomkin!. If it’s missing some genre tropes and mainstays (no voiceover narration, no real femme fatale, no flashbacks), it does the finest thing a B-movie can do and distils things right down, the way Randolph Scott’s Boetticher cycle has a Western ‘essence.’ Most of all, the film gives us what I humbly feel is one of Zachary Scott’s best, most inspired performances on screen – and this from someone who un-ironically loves his camp/straight debonair villain roles – so if you’re into this kind of thing, this one can be a rewarding watch.
The film is based on the Wade Miller 1947 novel of the same name, the first in a series on Max Thursday, alcoholic PI who loses his agency and his family’s respect to the bottle (the film swaps balmy San Diego for New York, for money reasons, and I can forgive changing the kid’s name from ‘Tommy’ to ‘Jeff’ for the neat improvement of making him a former police officer to add to the man’s humiliation). Now a house detective at a creaky old flophouse, Thursday is sleeping it off when receives an unexpected visit from his ex-wife Georgia (a weirdly out-of-place Faye Emerson, who could have done with some reinterpreting) who tells him their toddler son has gone missing, together with her brother who was minding him at the time. The man must now rouse himself, soon to scour the gritty dregs of the urban underbelly and get mixed up in a diamond smuggling racket, all in search of his little boy. But not before he gets drunk again – right away. As in, right upon encountering his first lead. I suppose one shouldn’t, but I really love this unexpected slip, miserably humorous, so believable.
Maybe it’s not “The Lost Weekend” or even “Smash Up,” but Zachary Scott is admirably, genuinely moving as the rummy ex-cop; it could have been his own real-life drinking problem or trouble losing his wife to John Steinbeck (!), but given the typecasting Scott was both used to and frustrated by, it feels more like he found a little freedom in this small-time project to express something nuanced, something innermost. His performance, typically solid Scott stuff, has a dull bruised intensity all over it, in his eyes, his hands, and there’s a finely-delivered tremor in his voice, part angry, ashamed, tearful even, as he keeps trying to prove he’s not drunk (even when he is) or fight from taking another glass, tripping and stumbling out of dissociative hangovers and into puddled waterfront alleyways to piece together clues that hardly make any sense. He persists though, as he tells ex-wife Georgia, because he feels no-one could be more invested in this case as he would, a father looking for his child. The novel’s writers were disappointed in the way the film portrayed their hero, a man low on willpower and vulnerable to quite a lot of beatings. But this is no anti-hero, just a noir man of the first water: what Joel McCrea would call a mean man, a tough man with a weakness like our Bogie, Duryea, or Ladd types, shakily drawing on strength he hasn’t got a lot of, to do what it takes.
And boy does it take a lot, pulp-style: creepy disreputable physicians and coshes to the back of the head, ominous heavies and bullets to the arm, quiet men with game legs and tough-ish men with long scars, unsettlingly low-talking, hypochondriac villains parked inside a labyrinthine warehouse (there’s a hilarious highlight Ian Fleming would appreciate here, when J. Edward Bromberg slaps Zachary in a sudden rage and then, remembering his condition, apologetically checks the old pulse). There are torn cigarette packets and diamonds in grubby pouches (swapped from pearls swiped from the Philippines). There are shadowy elevator carriages and rickety stairs in rain-streaked back streets, mildly understanding former colleagues milling about at coldly dreary police headquarters (filmed in Manhattan’s Tombs), a brief but gorgeous scene on a lowering ferry bridge plus a thrilling subway chase/fight scene at Court Street Station (here are those mean streets!).
There’s also some intriguing, fleeting commentary on the cop (or soldier?) who must now chafe in a grey suit and ‘ask’ for things, this hard-boiled man who somehow always seems to be taking a beating but won’t carry a gun, and women of all kinds trying to make their way to well-lighted places in the ways they know how, like mysterious gal ‘Angel,’ a little worn but still beautiful in her shiny raincoat (played with brilliant cheek by Kay Medford), Smitty the tenacious, bedraggled proprietor at Thursday’s place, excellently written for Mary Boland (reminds me of Jessie Florian in “Murder My Sweet” down to the bathrobe). There’s even an interesting little miss-it moment in the middle of Thursday’s punch-up by the train lines: a couple so obliviously, blissfully wrapped up in each other while waiting for their train to come in. 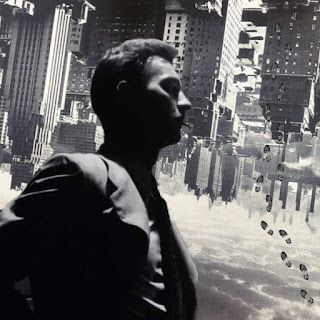 Sure, the plot is unusually convoluted and the pacing might be a bit thick at times, but isn’t that the way with some of our most classic, favourite noirs? Not the hard, fast ones maybe, mostly the ones where everything is so tenuous and yet so tangled up together, the hero in constant almost-confusion (John Hodiak’s George Taylor and Dick Powell’s Marlowe are some of my own top choices, Ralph Meeker’s Hammer is another paragon of confusion but that’s another story for another day) even as he is about to crack the case wide open, but he keeps going only because at least he’s on his feet and semi-conscious for the time being and there’s at least one thing he can control.
The novel’s writers were apparently also generous connoisseurs of Chandler and Hammett, reworking their favourites into their own stories, and in the same vein, Director and Co-Producer Lerner turns out to be a real king of Poverty Row traditions, relying on out-of-fashion or blacklisted friends for five day’s pay (Eli Sullivan doesn’t utter a single word but what a face, and for some of the cast this turned out to be their last on-screen appearance) and old-school veteran cinematographers like Gerald Hirschfield and émigré Broadway set designers like Leo Kerz who could work miracles with very little. The film uses painted sets and silent-era soundstages that seem half-artistic, half-natural (there’s a sublime effect of light ‘reflecting’ from the Hudson Bay, who knows whether or not it’s the real thing!).
Lerner also saved on things like expensive sound and editing work thanks to his talented wife Geraldine, who did both, helped along with a little guerrilla-style filming and tersely timed action sequences, all of which somehow lends things a paradoxically claustrophobic and big-city feel to the mess. Post-Lindbergh censorship rules also prevented any part of child kidnapping to appear on film but somehow keeping the object of Max’s mission out of sight is perfect as the ‘centre’ of the mystery seems to oscillate from side to side, tipsy-like, topsy-turvy like, until the key is right where Max least expected it, the only place it could have been (his last line before the fog finally lifts is a real zinger).
For a guy grasping at straws in search of return and redemption, and for a print so cleanly restored from a rediscovered 35mm safety roll (only two years ago! and apparently with some missing frames but we’ll gladly take it), lost and found is may be the best way to describe this small but worthwhile gem Xo
Dreaming in Television
Uncle Martin without yet-apparent magic powers! Devotee of classic film and television that make great rainy-day escapism 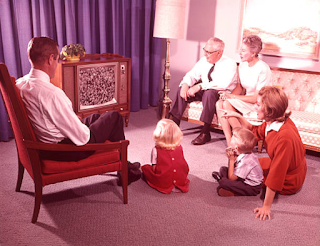 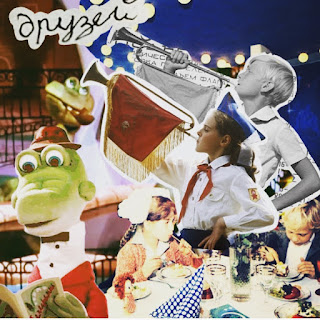 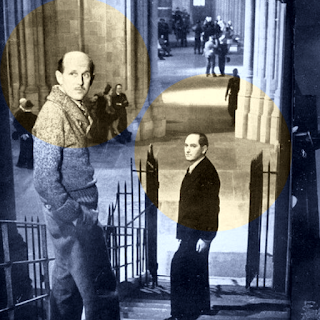 Church bells and Chaucer, an odd paperback mystery steeped in the soporific summertime light of the Weald’s meadows. A wartime propaganda picture might seem an unlikely choice for some rainy-day consolation, but then Powell and Pressburger’s A Canterbury Tale (1944) is a very unlikely wartime propaganda picture, even if makes fine, earnest overtures to the war effort, and courts Britain’s strong translatlantic Ally through a real life ‘acting’ US soldier. But this is the realm of the Archers who ‘started with naturalism and finished with fantasy’ – and right from the film’s glorious opening sequences where a medieval pilgrim’s falcon in flight turns into a swooping Spitfire, and the falconer into a foot-soldier, it all makes the kind of sense that’s hard to explain.   Its rambling plot and pedestrian pace – a canter, if you like – bemused viewers then and can bemuse viewers now. But somehow A Canterbury Tale will always strike me as the most strange, mystical, and personal-feeling of 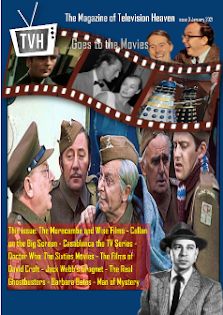 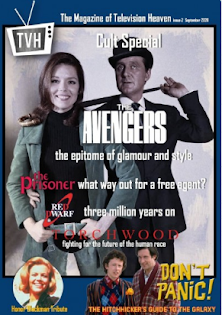